This is about how our new approach to boosting profits and growing revenue determined the fates of two Fortune 200 CEOs. (We didn’t work with either of them; it’s about what they did.)

One CEO, Bernardo Hees, of Kraft-Heinz, relied solely on cutting costs, using one of its more extreme forms, zero-based budgeting. This resulted in the neglect of customers; sizable layoffs, which drained energy from the staff; and insufficient attention to marketing, hurting top-line growth.

By contrast, during that same period, Best Buy, led by Hubert Joly, substantially lifted the company’s value by using a broader set of ways to boost results. He found, and harnessed, Best Buy’s most appropriate upside elements. Among them:

The graph below shows what happened to the two companies’ enterprise value (the money needed to buy all of the stock and pay off all of the debt) during their CEO’s common tenure. 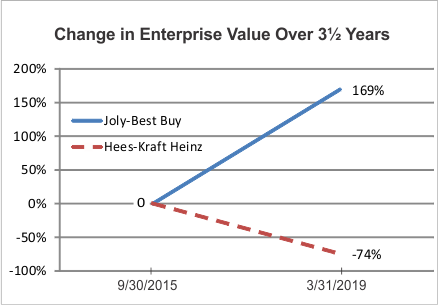 In the Spring of 2019, Mr. Joly transitioned to become Best Buy’s executive chairman.

As mentioned, Mr. Hees was replaced.

Lesson: Find and use all of the applicable elements of your upside to boost your results.

Our book, The Upside Within Reach, will guide you.

The comparison above is based on the quarterly periods ending on September 30, 2015 (Kraft-Heinz’ first reported quarterly results after the two companies merged) and March 31, 2019.

Yahoo Finance, which notes that its data is derived from multiple sources, or they calculate it themselves, and the Kraft Heinz website.